Saturday, Day 2, we arrived back at our finishing spot and got underway around 8am

The first river marker we spotted for the day was 602

After a very hot day 1 and a predicted temperature today of 41, I was not really looking forward to getting back in the boat!  Again it was already over 20deg when we kicked off.

As soon as we were underway, and I had relaxed back into it and all of the tiredeness of the first day vanished. A close up of the cliffs about 1 hour into our trip today – this is a really nice cliff that runs out to the Murbko Forest Landing. The cliff started out around 50M in height as we first saw it and over about 1.5km it gradually tapered away to the Murbko Forest Landing, which was our only stop for the day we could call in and meet our land crew.

From here on for the most part the scenery was mostly flat for the rest of the day, and after the cliffs, it was a little bit boring!  Still, every bend we passed around offered something different, Our first paddle steamer – going up river  By late morning, it was starting to get a bit hotter, but with a nice 15km/h headwind for most of the day, it really did keep us pretty cool and we made good time. We made it back to Renmark, and it was only a few more KM till we arrived back at the Caravan Park – and a late lunch around 1pm.

Given the weather – we expected to cop a lot of ski boats on the river, but we were fortunate and only had a few pass us and no real problems.

We had a nice leisurely lunch and a good look at the maps and decided that after the 40km we had just done, we could do a bit more. we settled on just doing a further 5 or 6 km to a spot where we could get off the water today.

Back on the water after lunch we  passed under our first bridge – and the only opening Bridge on the Murray at Paringa. And for context, a photo from the bridge back towards the Caravan park. Just around the corner from the bridge is Lock 5. As we arrived a riverboat had just come thru upstream, and we were able to go right on in! 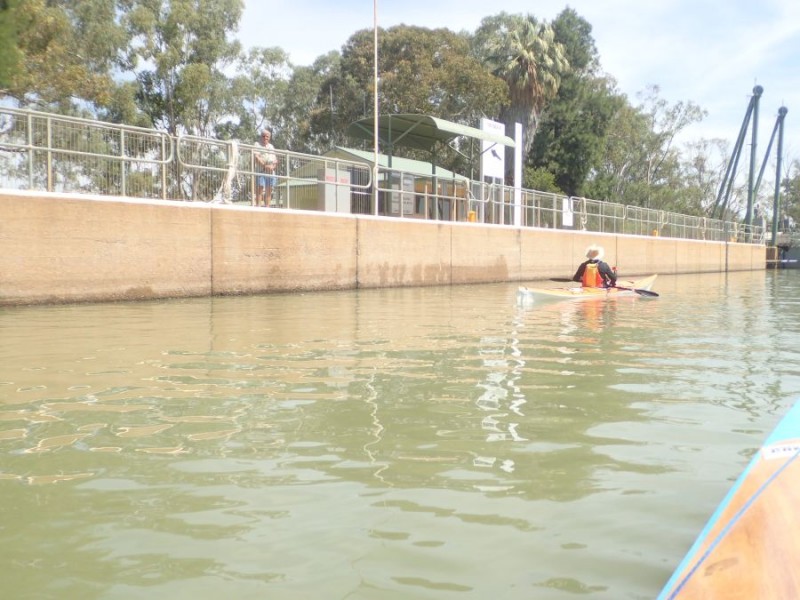 It was the same Lock operator today as yesterday, (he does Lock 5 on the weekends) and again, we dropped about 3m in pool height. We go from a dark steel doors to the scenery opening up before you as the lock opens up.

Our final marker for the day was 560km and the GPS showed we did 46km for the day and we were off the water a little after 3pm.

I’ll put up some more maps from the GPS during the week.